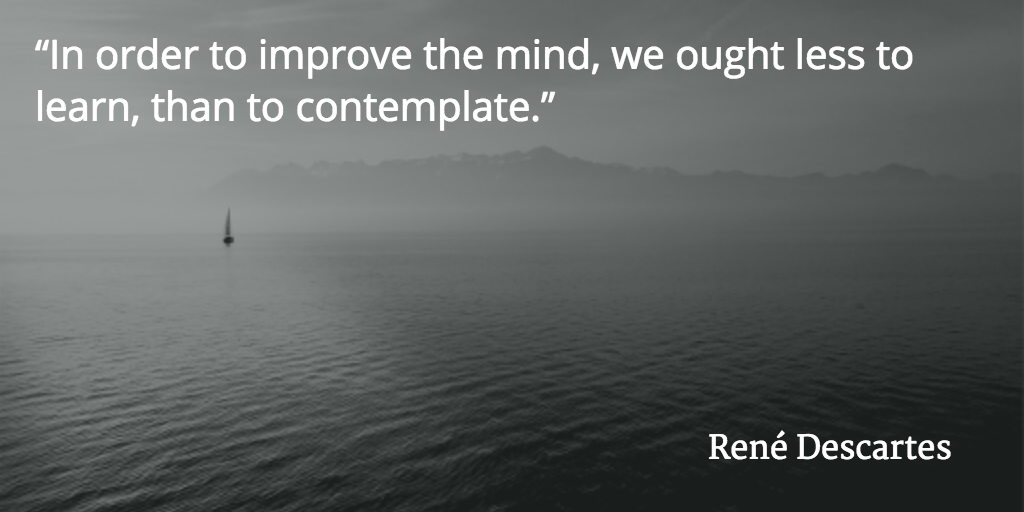 Do Meditators Exist? What Neuroscience Has To Say

When Rene Descartes declared “I think therefore I am,” what type of thinking do you suppose he meant?

Marcus E. Raichle discovered the default mode network, and in 2005 showed that the human brain is intrinsically organized into dynamic, anti-correlated systems.

The default mode is deactivated when we use the task positive network — which, unfortunately, is also known as the direct experience network, the central executive network, the external attention system, and the cognitive control network — and probably others …

The task positive network responds to attention-demanding tasks — when we focus our conscious attention on the external environment or our bodily states.

Dr. Pierre Magistretti concluded that the activation of the default mode represents an introspective activity of the brain, during which the center of our consciousness or awareness is reflecting about itself.

The default network is associated with maladaptive, depressive rumination in people with major depressive disorder. Failure to deactivate the default mode during demanding tasks is associated with autism and overactivity with schizophrenia. It’s preferentially attacked by Alzheimer’s disease. And, lower connectivity was found in people who have experienced long-term trauma.

Interestingly, listening to your preferred music enhances the connections of the default mode, which is why it’s been used as a treatment for autism, and also elicits these types of reactions in Alzheimer sufferers:

Scott Barry Kaufman, a psychologist and author of Ungifted, has found that the default mode (Daydreaming in particular), is related to many positive functions which include …

Self-awareness, creative incubation, improvisation and evaluation, memory consolidation, autobiographical planning, goal driven thought, future planning, retrieval of deeply personal memories, reflective consideration of the meaning of events and experiences, simulating the perspective of another person, evaluating the implications of self and others’ emotional reactions, moral reasoning, and reflective compassion.

There is reduced activation and reduced functional connectivity of the default mode in long-term meditation practitioners.

The thought goes that the default mode can make us unhappy, it’s a distraction, that mind-wandering is too often a negative process, and that meditation and in particular mindfulness can help to ‘quiet the mind.’

And it does, actually I find it interesting that the name is mindfulness when the idea is to use less of it.

The PCC shuts off when experienced meditators are in a state of “effortless doing” or “undistracted awareness.”

The PCC (Posterior Cingulate Cortex) is a central hub of activity in the default mode, and it plays a part in learning, memory, reward, task engagement, and empathy.

Failure to keep the PCC deactivated is related to attention lapses–you know, those times when you should be studying and suddenly your mind starts to wander, that’s the point you switched to the default mode.

But we lose something–actually, we can lose quite a lot–when we only focus on keeping the PCC deactivated. We miss out on everything the default mode has to offer, including self-referential thought, or thinking about ‘I’ …

We can actively try to keep the PCC activated, by forcing a state of daydreaming.

Mind wandering is volitional, meaning we can choose to do it–it doesn’t have to come in the form of a distraction from what’s really “important.”

The network that lights up in meditators (Task Positive) is the same as when we do math or have a conversation, it’s focused on the present moment, our surroundings.

Given that meditation is the act of shutting down the default mode, the brain network that allows you to think about yourself, I have to ask once more:

What did Descartes mean by “I think therefore I am”?

I would wager a guess that “becoming one with the world” is the feeling of shutting down your default mode, and losing that sense of self.

When we do this, do we think as Descartes did? Do people deep in meditation actually exist?