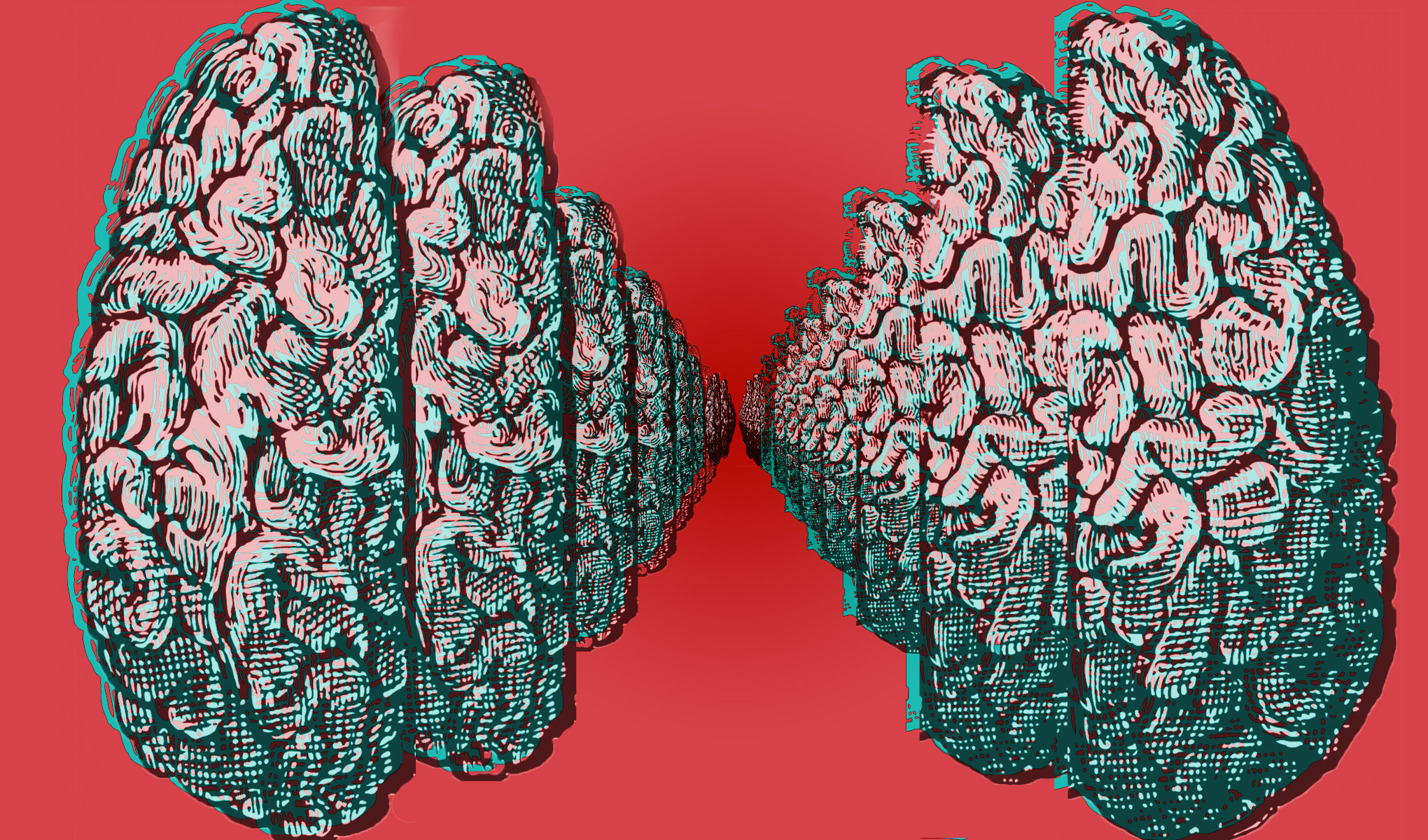 The Bicameral Mind and Our Constant Inner Monologue

If you’re not already familiar with the HBO series Westworld, I highly recommend checking it out. The new series is created by Johnathan Nolan and Lisa Joy but is based on a 1973 film by Michael Crichton.

It stars Sir Anthony Hopkins and Evan Rachel Wood, and is set in a Western-themed amusement park called Westworld. Within the park are “Hosts,” who look and talk like humans, yet are designed and programmed by Hopkins’ character to play out stories in as realistic fashion as possible.

The hosts and their stories are there to amuse rich guests to the park. The guests can interact and play along with the stories in virtually any way they choose. There is little in the way of repercussions as the hosts, while able to fight back, cannot cause much in the way of physical damage to their often violent visitors.

The series plays out with the hosts slowly remembering elements of their past “lives” (aka stories), things that should have been wiped clean begin to surface and cause them to question their existence. Along the way, the hosts start to acquire something akin to consciousness, and this is the topic for today.

An important aspect to the mental realm of the hosts is that their programming can speak to them. They hear voices coming from inside their head, telling them to “remember.” We learn later in the series that this is related to a theory known as the bicameral mind. 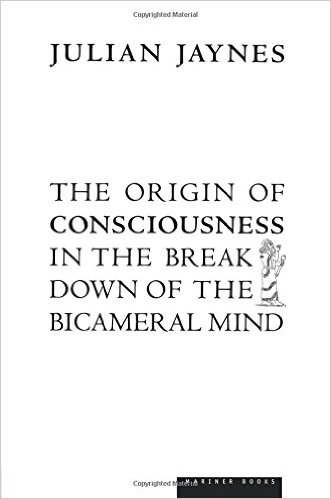 Bicameral means two chambers. It was first used in this psychological sense by Julian Jaynes in his 1976 book The Origin of Consciousness in the Breakdown of the Bicameral Mind.

Jaynes believed that up until as recently as 3,000 years ago, the ubiquitous state of mind was one in which one side of the brain spoke, while the other listened and obeyed. The voices were experienced as auditory hallucinations, and Jaynes theorized that this lead people to believe the voices were coming from God.

Consciousness to Jaynes meant “that which is introspectable.” Those of our not-so-distant past who had a bicameral mind could not introspect, therefore they were not conscious. Jaynes uses Homer’s epic Iliad as an example wherein the characters never seem to have inner thoughts in the way we perceive them today. They seem much more like automatons.

“The characters of the Iliad do not sit down and think out what to do. They have no conscious minds such as we say we have, and certainly no introspections. It is impossible for us with our subjectivity to appreciate what it was like.”

A Bicameral mind lacked meta-reflection, it could not form an account why one thing was thought or some action performed. But this bicameral mind began to break down. The environment and society we were in began asking for greater mental flexibility, and the solution was found in the evolution of self-awareness. We discovered the ability to look inwards and ask “why?”

While the book was a success at the time, the theory itself suffers from a lack of qualified supporters. Richard Dawkins went so far as to say “It is one of those books that is either complete rubbish or a work of consummate genius, nothing in between!” Despite the neglect and shortcomings, there are aspects of Jaynes theory that should be taken more seriously, and while research will help unearth the truth, current research already lends support to some of his ideas.

The crux of Jaynes theory is the notion of two chambers within the mind, each in a individualistic sense that we cannot likely appreciate today, with our more cohesive minds and all. That being said, perhaps there are remnants of a possible bicameral mind in all of us.

We spend a lot of time talking to ourselves. It can be automatic or deliberate, the kind that distracts you from an exam or the kind you use to run through your shopping list on the drive home. It can be motivational when you are readying yourself for a game of tennis, instructional when you’re taking apart the computer, or destructive and pessimistic when the world seems against you and everything keeps going wrong.

This silent chatter is exactly what we want to halt when we meditate. We want to calm and center our minds by focusing on a particular sensation or repeating a mantra. Some even claim that the negative voices we hear are not actually us, and don’t represent our own best interests.

No doubt our inner speech does cause us strife at times, however, an eternally empty mind could pose it’s own problems. There exist people who cannot speak to themselves, often due to global aphasia—damage to two important speech areas of the brain, usually caused by a stroke. This loss unfortunately damages the person’s sense of self, a characteristic that’s also present in Autism spectrum disorders. An article in Nautilus notes:

“The ability to converse with one’s self … is essential for conceptualizing our emotions, processing our memories, and for predicting the future. It is inherently associated with our sense of self.”

So while the inner talk might be a burden sometimes, it appears to play an essential role in forming our own theory of self, helping us establish our idea of who we are. But then, from where do these voices actually emerge?

Who Does the Talking?

Strange things happen to patients that have had their corpus callosum severed. Between each half of the brain is a bridge containing hundreds of millions of nerve fibers, which allow both sides of the brain to whizz signals back and forth. This bridge is the corpus callosum, and as a defense against debilitating epileptic seizures, it can sometimes require separation. This disconnection effectively escorts each hemisphere to it’s own corner of the skull, where it remains unable to talk to it’s once friendly neighbor. 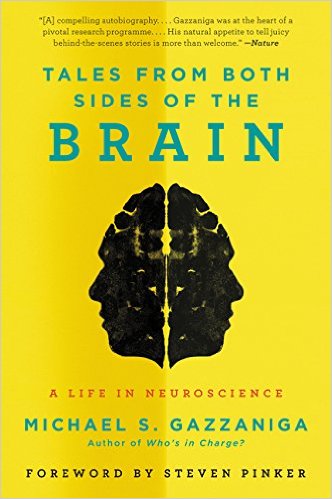 Research into the lives of people with divided brains has been primarily conducted by Michael Gazzaniga, a neuroscientist at the University of California, Santa Barbara, and who has written several books on the matter, the most recent being Tales From Both Sides of the Brain.

While the logical left-brain and creative right-brain idea is largely debunked, there are several functions and behaviors controlled primarily by one hemisphere. For instance, the left hemisphere contains the two dominant language areas—Broca’s and Wernicke’s areas:

Broca’s area is mostly responsible for producing speech, while Wernicke’s area is required in order to understand the speech of others. Interestingly, these are the same two areas damaged in those with global aphasia, meaning the areas are also critical when it comes to self-talk.

So each hemisphere partakes in many similar roles, such as controlling an arm and leg, yet they each also specialize in certain domains. So what happens when the hemispheres are disconnected? We remain able to perform the same tasks, yet the feedback between hemispheres no longer exists.

When text is presented to the right visual field, the left side of the brain can interpret it and, thanks to the language areas, read it aloud. If the text were presented to the other side, the person will simply utter “I don’t see anything,” because the one doing the speaking didn’t see it. However, the left arm might be able to draw what it saw.

What’s more, the left brain will make up answers for why the right brain acted the way it did. In a startling experiment, each side of one patient’s brain was shown either a snow covered lodge or a chicken foot, then asked to pick up a card containing an image related to what they saw.

“Experiments on split-brain patients reveal how readily the left brain interpreter can make up stories and beliefs. In one experiment, for example, when the word walk was presented only to the right side of a patient’s brain, he got up and started walking. When he was asked why he did this, the left brain (where language is stored and where the word walk was not presented) quickly created a reason for the action: I wanted to go get a Coke.”

Do we each carry with us the residue of a bicameral mind? Are those automatic inner monologues a lasting reminder of a time in which self-awareness didn’t exist? Is that sometimes annoying chatter box of the mind the signature of a self-aware, conscious being?

Jaynes speculated that the voices heard in a bicameral mind state were experienced as auditory hallucinations. In Westworld, the inner talk is supposed to help the hosts gain consciousness as they begin to realize the voice is their own. Whether jump-starting self-awareness this way is possible, I just don’t know, although there does appear a clear directionality to our current self-talk, and interestingly, research has found modern auditory hallucinations do originate in one side of the brain and propagate to the other.

Perhaps we do have a more subtle form of the bicameral mind, one in which the voice of the left hemisphere is no longer in some off-limits area. We’re lucky enough to have a right side that can and does question the intentions of the left, making mind control less of a oneway street and more of a two-way collaboration.

Does any of this cause you to question the contents of your mind? Does your mental workspace sometimes feel like it’s occupied by more than just you? Perhaps you’ll find an answer by talking among your selves.