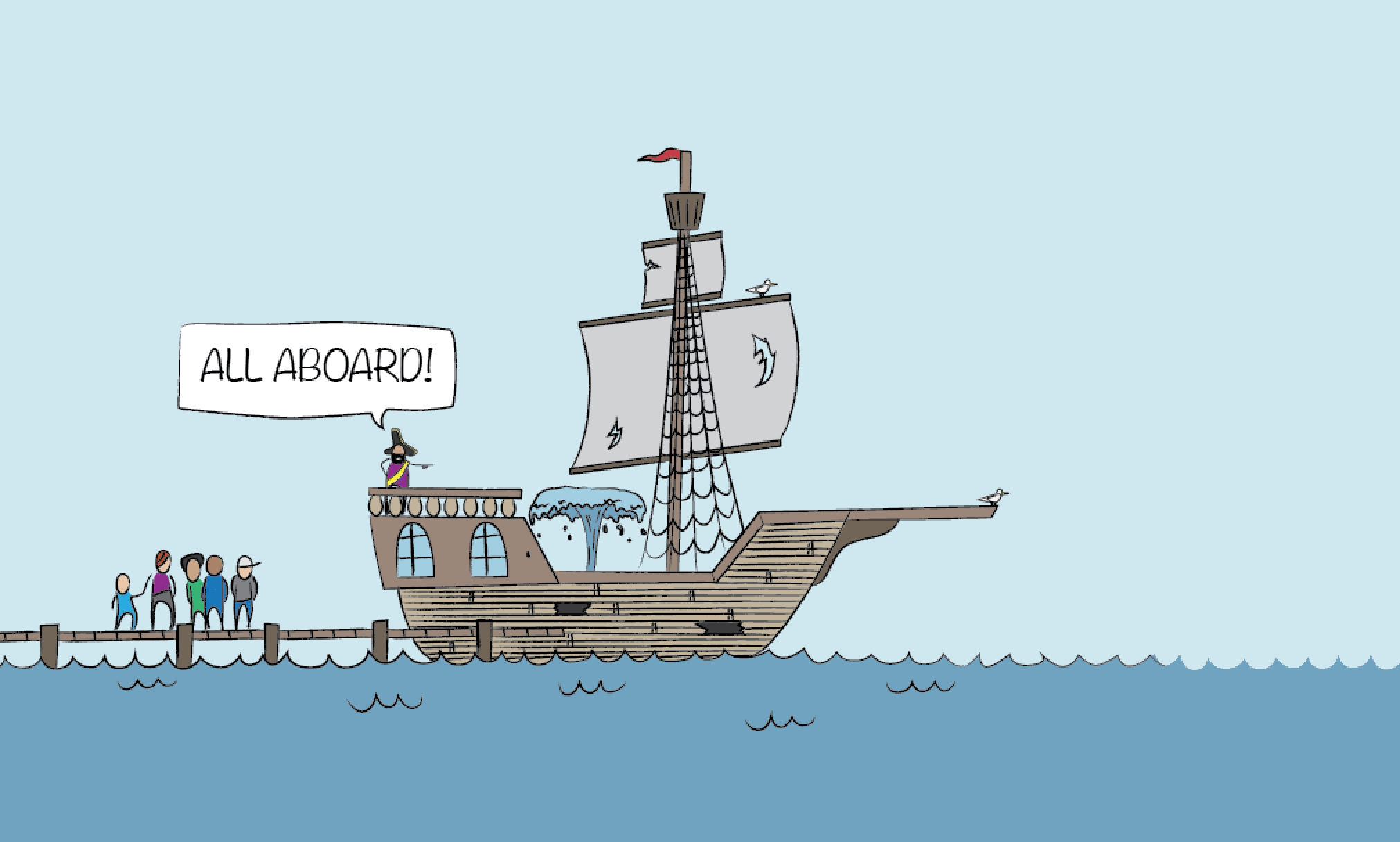 The Ethics of Belief

A shipowner is caught in two minds. His ship is showing signs of wear and tear, and he knows that eventually it’ll need to get repaired, but it takes time and money, and it’s scheduled to depart for the seas.

He manages to quell his concerns, coming to the sincere conclusion that it is fit enough to make another voyage.

It wasn’t. Down it goes with all the passengers onboard.

Back on land, the public cry in outrage at the shipowner. It is with him that the blame should lie. He is responsible for the deaths of all who sank, and should pay for his negligence.

In an alternate realm, let’s say the ship didn’t go down, and everyone arrived safely back at shore. Not only that, but it makes many more trips. How guilty is he then?

According to philosopher William Clifford, he is just as guilty either way.

“The man would not have been innocent, he would only have been not found out. The question of right or wrong has to do with the origin of his belief, not the matter of it; not what it was, but how he got it; not whether it turned out to be true or false, but whether he had a right to believe on such evidence as was before him.”

Clifford wrote this story for his 1877 essay titled the Ethics of Belief. He takes a hard stance on when we should feel confident in forming a belief.

He writes another story about a religious group who are suspected of kidnapping children in order to teach them of their religion.

The people accusing them of this crime get together and start harassing the religious leaders, doing everything in their power to stop them from performing their duties.

The dispute causes enough of a ruckus that a commission’s formed to look through the facts and determine if the religious group are guilty of the crime.

They weren’t. And they found that the facts which proved their innocence were readily available to the accusers. From then on, the rest of society distrusted the accusers. With their judgement proven faulty, who could tell whether they could be trusted in other matters?

Soon after, new evidence emerges, and a more accurate trial is conducted. This time, the religious leaders are found guilty. They have indeed been stealing children. The accusers were right all along, but does this validate their actions?

“However convinced you were of the justice of your cause and the truth of your convictions, you ought not to have made a public attack upon any man’s character until you had examined the evidence on both sides with the utmost patience and care.”

In an age of Twitter mobs, this advice takes on a modern appeal.

Beliefs shape our behaviour, they give us direction and purpose in life. All our knowledge is woven together, so it’s rather important to get our foundations right. We need direct experience, factual information, and logical reasoning be our guides.

“If a belief is not realized immediately in open deeds, it is stored up for the guidance of the future. It goes to make a part of that aggregate of beliefs which is the link between sensation and action at every moment of all our lives, and which is so organized and compacted together that no part of it can be isolated from the rest, but every new addition modifies the structure of the whole.”

While there are different levels of belief—from the heavy burden of ensuring a ship is safe to travel, to the innocuous belief of how best to make scrambled eggs—Clifford argues they should all be at the mercy of evidence.

“No real belief, however trifling and fragmentary it may seem, is ever truly insignificant; it prepares us to receive more of its like, confirms those which resembled it before, and weakens others; and so gradually it lays a stealthy train in our inmost thoughts, which may someday explode into overt action, and leave its stamp upon our character for ever.”

I doubt that we take such care in our belief formation.

The research on confidence is a bit all over the place, but the general impression is that a little work goes a long way.

The psychologists David Dunning and Justin Kruger found that people who have learned a little think they know a lot, while those that learn a little more start heading in the opposite direction.

Think about all the information at your fingertips, and how many casual Googlers there are. A few blog posts might be enough to convince someone they know more than their doctor.

Beliefs don’t just guide our individual behaviour. They’re passed among us. We hand them down to future generations to play with and elaborate on.

“No one man’s belief is in any case a private matter which concerns himself alone. Our lives are guided by that general conception of the course of things which has been created by society for social purposes. Our words, our phrases, our forms and processes and modes of thought, are common property, fashioned and perfected from age to age; an heirloom which every succeeding generation inherits as a precious deposit and a sacred trust to be handled on to the next one, not unchanged but enlarged and purified, with some clear marks of its proper handiwork.”

Any belief could have an effect on the course of mankind. Our beliefs drive our actions which weave together with the rest of society. You never know who will get hold of an idea and how it might spread.

The moment a belief leaves our head and finds its way into another, we lose control of it. Ideas are like viruses, little organisms that feed on certain neural codes, spreading and morphing within the minds of their hosts.

This is what scares me with all of the misinformation, fake news, and alternative facts to watch out for. It can be hard separating reliable information from erroneous or potentially dangerous. It requires greater diligence and a critical eye. A lazy mind is more susceptible to an infectious idea.

We’re free to think what we want, and to uphold the value of free speech, but when our speech can influence other people, and our views can be imprinted upon other impressionable minds, we should be taking extra care in establishing what we believe.

“if the belief has been accepted on insufficient evidence, the pleasure is a stolen one. Not only does it deceive ourselves by giving us a sense of power which we do not really possess, but it is sinful, because it is stolen in defiance of our duty to mankind.”

Clifford thinks that if enough people commit this sin, we might slip into savagery.

“The danger to society is not merely that it should believe wrong things, though that is great enough; but that it should become credulous, and lose the habit of testing things and inquiring into them; for then it must sink back into savagery.”

We wouldn’t have hospitals, smartphones, or microwaves, if we hadn’t tested our ideas and followed the scientific method. The way forward is to conduct experiments, form hypothesis and test them, replicate past studies and refine old ideas. More than anything, perhaps, we need to do away with dogmatism and get comfortable being uncertain. We don’t get anywhere good by rejecting science and splitting off into sects that believe whatever they feel to be true.

Clifford elaborates on the notion that knowledge is power:

“No simplicity of mind, no obscurity of station, can escape the universal duty of questioning all that we believe … the doubt which comes out of it is often a very bitter thing. It leaves us bare and powerless where we thought that we were safe and strong.”

“It is the sense of power attached to a sense of knowledge that makes men desirous of believing, and afraid of doubting.”

Everybody likes to be confident. We want to feel knowledgable, smart, capable. We don’t like to fail, to feel stupid, or subordinate. As mentioned earlier, a little information goes a long way. A quick web search can inflate an ego. This is a problem. Knowledge takes time to form. Thinking is effortful and slow, learning is an arduous process.

“’But,’ says one, ‘I am a busy man; I have no time for the long course of study which would be necessary to make me in any degree a competent judge of certain questions, or even able to understand the nature of the arguments.’”

To which Clifford would respond:

“Then he should have no time to believe.”

For those of us who are primarily self-directed learners—and I am firmly in this boat—the wealth of online information is both a blessing and a curse. We have all the resources we should need, so much so that we could devote our lives to consuming it all and never reach the end. But for this reason it’s virtually impossible to tell when you know enough to shift an opinion into a belief. There’s always the chance we’ve missed or misinterpreted something.

Of course we should be able to have conversations and express opinions even when we lack adequate knowledge, but such opinions shouldn’t be held too strongly. We should be able to clearly differentiate between an opinion and a belief. We should recognise their fragility, and maintain an openness to change when evidence comes our way.

Maybe we shouldn’t treat our ideas and beliefs as a part of us. Instead of saying “I believe…” say “I have this belief…” This way maybe we won’t feel personally attacked when someone criticises it. If an idea is viewed as an external thing rather than an extension of who we are, we’re more likely to look at it objectively than feel personally involved. Like looking at a virus through a microscope as opposed to being told we’re infected with it. But what do I know?

Read Clifford’s essay in full here: The Ethics of Belief