We set goals with the best of intentions, to improve upon our lives. But we’ve never really given enough thought to how we set them, and perhaps more importantly, how we go about achieving them.

There are two underlying problems we can run into:

Once we reach whatever the goal is, we need to continue living. How we do that depends on whether the goal was a static point or a way of being. In one scenario, we congratulate ourselves and then go back to everyday life; in the other, we are a new person, and our lives are lived in a different way.

You are the sum of your experiences, right? For every action you make, thought you think, or experience forced upon you through circumstance, you change. Your brain is wired so that with every electrical pulse that resonates throughout, the neurons grow stronger or weaker.

Gonzo journalist Hunter Thompson summed this idea up perfectly in a letter he wrote to his friend Hume Logan in 1958:

Every man is the sum total of his reactions to experience. As your experiences differ and multiply, you become a different man, and hence your perspective changes. This goes on and on. Every reaction is a learning process; every significant experience alters your perspective. — Hunter Thompson

You are a new person in every instant, and your perspective changes accordingly. You grow smarter, your likes and dislikes subtly change, and so do your visions for your future.

Case in point, are you in the same profession or industry that you said you would be when you were 5? Most of us can’t say yes to that, because as we grew up, we became new people.

Unfortunately many of us now try to force ourselves to follow our goals, despite our growth and new perspective. It would be a failure for us to let it go, so rather than have the goal adapt to us, we bend ourselves back towards the goal. 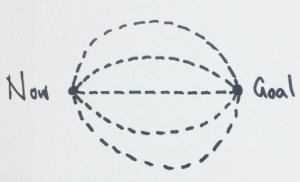 So it would seem foolish, would it not, to adjust our lives to the demands of a goal we see from a different angle every day? How could we ever hope to accomplish anything other than galloping neurosis?

This idea is at the heart of fuzzy goals. Targets that are flexible and adaptable are more likely to be achieved in a way that’s authentic and true to ourselves. 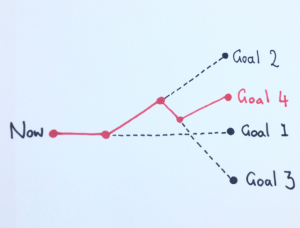 You Are What You’re Not Yet

Sartre believed that what holds us back from making big decisions is bad faith — we lie to ourselves and stay where we are because we refuse to admit that we always have options. The fear of those choices scares us into making no decision at all, to sticking with what we have because it’s safe and familiar.

This act of inaction, of turning a blind eye to the possibilities, is to live an inauthentic life.

Man is condemned to be free; because once thrown into the world, he is responsible for everything he does. — Jean-Paul Sartre

Sartre echoes Hunter Thompson’s belief that the self is not constant, it’s ever-changing, and as such, any role that a person adopts does not define that person, because that role will eventually come to an end.

As far as men go, it is not what they are that interests me, but what they can become. — Jean-Paul Sartre

Going even further, Sartre believed that a person is not what they are now, but what they could one day become. Given that each of us has many possible futures, we are an amalgamation of possibilities.

This idea is reminiscent of Schrödinger’s cat — picture a cat trapped inside a box that contains a deadly poison, and as long as the box remains shut, you don’t know whether the cat is dead or alive. According to Erwin Schrödinger, until the box is opened and the state of the cat is revealed, it is both dead and alive. 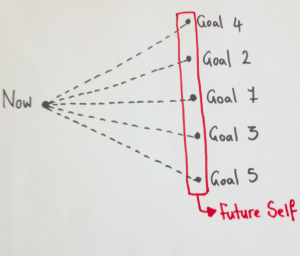 There are an infinite number of possibilities regarding who we might one day become, and according to Sartre, we are at once all of these prospective selves. But until we actually get there, until we meet face to face with that future self, let’s not try to force ourselves into becoming someone we’re not by fearing change or failure.

Let’s focus on the journey, on becoming who we are, rather than just accumulating accomplishments or following blindly toward the goals of our previous selves.

The goal is absolutely secondary: it is the functioning toward the goal which is important. And it seems almost ridiculous to say that a man MUST function in a pattern of his own choosing; for to let another man define your own goals is to give up one of the most meaningful aspects of life — the definitive act of will which makes a man an individual. — Hunter Thompson

Thanks to Brain Pickings for the inspiring post on Hunter Thompson.