Read over this list of words once, and try to read them reasonably quickly, you’ll be tested on them later:

So much of our lives rest on our ability to find and anticipate patterns. Patterns drive the majority of our behavior.

Our habits are patterns, we make the same actions each time we brush our teeth, put on our shoes, or sit down to eat.

Language wouldn’t exist without this pattern prediction ability — we’ve become so adept at understanding the specific patterns that make up our native language that we don’t even need to think about it.

You can read and understand what this sentence is saying without paying much conscious attention to each letter in every word, instead you are consciously attending to the greater meaning of it. Consider that you can still read a paragraph in which almost every word is misspelled:

Aoccdrnig to a rscheearch at Cmabrigde Uinervtisy, it deosn’t mttaer in waht oredr the ltteers in a wrod are, the olny iprmoetnt tihng is taht the frist and lsat ltteer be at the rghit pclae. The rset can be a toatl mses and you can sitll raed it wouthit porbelm. Tihs is bcuseae the huamn mnid deos not raed ervey lteter by istlef, but the wrod as a wlohe.

Our brains are so competent and able to anticipate the words in each sentence that it can ignore glaring mistakes and still take the message away. Look at this sign and read it quickly: 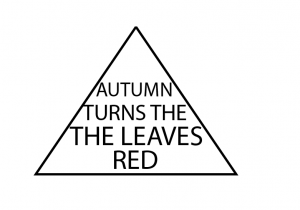 Did you notice the problem? Try reading it again, but more slowly this time. Did you realize that there’s an extra the in there? Our predictions are based on our past experiences, our brains turn these experiences into patterns that we unconsciously use to guide us. So reliant are we on these patterns that they can shape our actual experience.

How many of the words in the list at the beginning of the chapter can you remember? Here’s your test, which of these three words was in that list:

What do you think? It’s clearly not table or shoes is it? It must be have been winter. It was a trick question, none of those words were in there, but given the overall theme of the words in the list, we used that higher level of meaning to predict which of those words would follow the pattern.

Language is one example, but the idea is broadly applied to most of our lives — music, film, the weather, buying a coffee, ordering a pizza, or watching a football game. We have preset ideas and expectations of what will happen, based on our past. When the patterns are met, we can pay very little attention to them, if they go wrong they will often raise a red flag.

The Joys of Expectation

The brain is sensitive to change. Our lives can easily pass by on autopilot when everything goes as expected, but change — a deviation from an expected outcome — draws our attention to it. If a light outside suddenly flashes, we look up; if a driver slams on his car horn as you’re on a pedestrian crossing, you turn and jump a little.

These changes must pass a threshold — if the light comes on gradually over several minutes, we’re less likely to notice it; if the sound of the horn doesn’t glare above the other noises of the environment, we take no notice of it.

Some changes we expect. While we might not know exactly what is coming, we know that something is coming, we anticipate something different. Anticipation and expectation play influential roles in our lives, sometimes even irrationally so.

Consider that people will often rate a Friday as better than a Sunday — strange considering that Friday involves work whereas Sunday is a full day off. The reason, of course, is that on Friday we’re anticipating the weekend, and on Sunday we’re dreading the work week. We’re not, clearly, living in the moment.

Here’s another example: in your opinion, who is the most attractive person on the face of the earth? What would you give to make out with this person? Alright, now let’s say that you do, in fact, get to make out with them, but you have a choice as to when — it could be right now, in 3 hours, tomorrow, or in 3 days. Which would you choose?

Not many people choose right now or even in 3 hours, why not? Because we want time to anticipate it, to mentally ready ourselves and relish the expectation that it brings.

This is one reason why experiences bring more happiness than objects. When you buy a ticket to a Rolling Stones concert or a trip to Paris, the excitement that comes from anticipating the event is itself very enjoyable.

When it comes to things, we expect them to be here now, anticipation in this regard is not fun. In the case of events and experiences, that drawn-out expectation puts butterflies in our stomach, we relish it. Perhaps it’s because we know the event won’t last long, it’ll be over in the blink of an eye, and by having time to imagine what it’ll be like first helps us to mentally savor the entire thing.

With objects, we plan to have them for a long time, we don’t need to give them up. Many still think that these objects will provide a great deal of happiness in the long run, but this expectation is flawed, as we easily become habituated to things that occur often in our life — we get so used to them that we forget they’re even there.

The brain is sensitive to change, and experiences are changes in the normal everyday lives we live—objects might start out like that, but they soon become mundane items that the brain no longer gives any attention to.

Prediction, Ray Kurzweil argues in his book ‘How To Create A Mind,’ is the primary reason we have a brain :

When we get something we like — tasty food, sex, music that sends shivers down the spine, for example — we get a feel-good hit of dopamine. The role of this neurotransmitter spike is to motivate us to get more of this particular experience in the future.

When we first start encountering these experiences, there’s a noticeable spike in brain activity that arrives at the time of the experience, however, over time that spike starts to occur whenever we anticipate the experience.

Wolfram Schultz is a neuroscientist at the University of Cambridge that studied a monkey named Julio. The task placed upon Julio was to press a lever when a shape appeared on the screen in front of him. If he did that successfully, he would be rewarded a drop of juice — which Julio loved.

Initially, activity spiked in Julio’s brain — specifically with regard to the neurotransmitter dopamine — when he was rewarded with the juice. After many trials, however, activity spiked when the image appeared, not when he received the juice.

The image became so strongly associated with the reward that the two were then considered one. If the image appeared but the anticipated reward was not delivered, the result was distress — much in the same way we would have withdrawal symptoms when breaking habits and addictions.

We could live, if we wanted, encased in our comfort zone, always sticking to what we know and avoiding the unknown. Yet most of us need some novelty — some more than others.

Anticipation can be a negative feeling when it’s directed toward something we fear or that is particularly dangerous, but for the most part we need the anticipation of something new in our lives — whether it comes from a trip, a new book, music, or meeting new people.

When the situation is free from anxiety and stress, expectation and anticipation are enjoyable — sometimes even more so than the event they’re directed at.

The Point of Patterns

We begin storing patterns in memory from the moment we start interacting with our environment. If there are electrical signals traveling along your nerve fibers and into your brain — however developed that brain may be — you are tasked with decoding those signals and discovering useful patterns.

Patterns are not useful simply because they are accurate, they are useful because they allow us to predict future instances based on similar circumstances. Instead of reacting to what happens, we start anticipating and preparing in advance.

This expectation comes with its own set of emotional byproducts — when we anticipate a negative event, we might experience apprehension, anxiety, worry, and nervousness; if the event is deemed positive, we may feel hopeful, enthusiastic, eager, or confident.

Sometimes change is not expected, we instead believe the environment will remain the same for the foreseeable future — this is still an expectation based on pattern recognition, mind you.

When subtle pattern violations are not strong enough alert us, we can end up misperceiving the environment — we might read misspelt words or claim to have seen words we in fact did not.

When an unexpected violation occurs which is large enough to be noticed, we are immediately asked by frightened and confused areas of our brains to diagnose the root of this surprise, determine whether we are safe or in harms way, and make an adjustment so that we are more alert to the source in the future.

The mind lives and breathes patterns. From basic shapes and colors to conversations, music, and humor. Expectation drives our behavior — whether it is to avoid or approach, to change or stay the course.

We learn when we form patterns that are more accurate, more detailed, and more useful than those we have presently. When it comes to learning, we must seek out the unexpected and unknown, while being open to restructuring what we think know.

This was an extract from Connecting the Dots: Learning How to Learn for Modern Day Thinkers—Get it here!