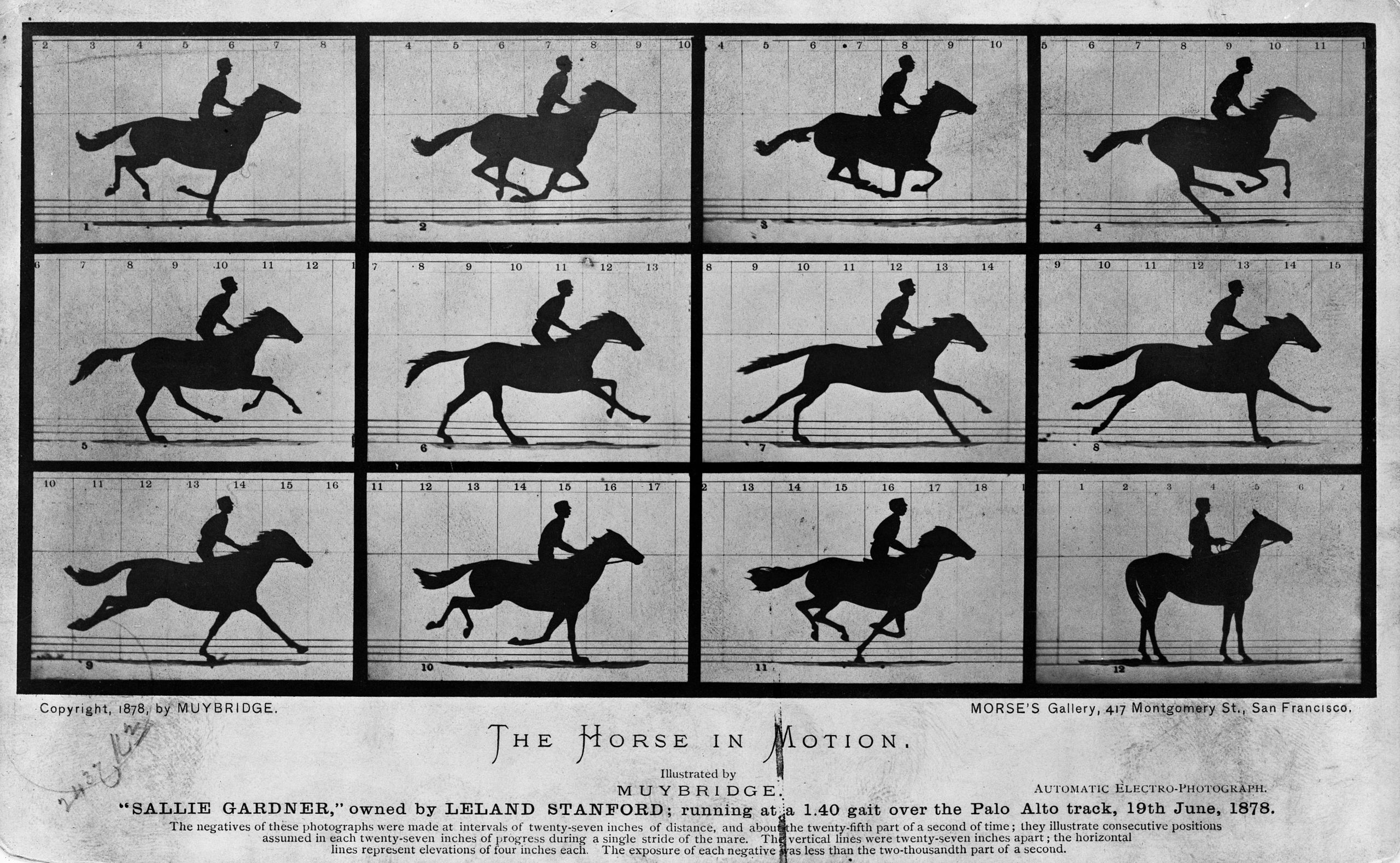 Animation and the Nature of Perception

There are limits to what we can see. That’s obvious when you consider how much of the light spectrum is invisible to us, or how a speeding car whizzes past only as a blur, or how perceptual illusions make you see things you know aren’t there.

Here’s one more example: all the movies and videos we see are not free-flowing moving images, even though they appear so. They’re long collections of static images, presented quick enough to create the illusion of continuity.

When we use our devices to record reality, they take snapshots. Your camera captures frames, your microphone takes samples. Everything reduced to moments in time, image after image with a slice of accompanying sound.

To what extent do our perceptual systems resemble these devices? Are they just digital versions of our biological originals? Do we sample reality as they do, but so quickly that we never notice it? Or, as limited as our vision might be, is it continuous and unbroken?

Long before we had flat screens and smartphones, we had the phenakistiscope. Invented in 1832 almost simultaneously by the Belgian Joseph Plateau, and the Austrian Simon Stampfer.

These rotating discs had images placed around them, each one aligned with a small aperture. To see the animation, the disc would face a mirror as it spun quickly, while the viewer peered through the apertures to watch the reflection.

Awkward as that process might sound, today we have gifs that highlight how beautiful some of the designs could be. Here’s a full disc:

Here’s a look at one section:

And so began the development of moving images. Armed with the ability to fire rapid successions of pictures at people, inventors around the world worked out ways of making them longer, faster, and easier to see.

Things got so good the difference between film and reality faded. Now they look and move just like things do outside, in real life. It helps us get immersed in the show, to live inside the movie, at least until something happens that snaps us out of it.

Maybe you’ve seen a movie with a fast car, and at some point, while that car is riding the tarmac, the wheel stops and changes direction. Not literally, it just appears to. Instead of going in the same direction as the car, it looks like it’s in reverse. This is called the wagon-wheel effect.

Beyond wheels, the effect can be found in numerous other places:

As long as you can fracture an image, you can achieve this effect. Absent of screens, a strobe light can make for an in-person levitating water effect. What’s more, in 1967, W. A. H. Rushton wrote that it’s possible to see these effects by humming loudly or chewing a carrot, as doing so vibrates your eyes.

But perhaps you’ve seen something like these effects without a strobe light, camera, screen, or carrot. Maybe you looked out at a car and noticed the wheel spinning the other direction, or you were in a plane and the propellor shifted into reverse.

While the effects aren’t as consistent as what we find with the regular sampling of screens and strobe lights, it is not uncommon for the wagon-wheel effect to appear in person. But why would that be? Do we take snapshots of reality? Does our perceptual system chop up experience into discrete moments?

We know how animation works and we know why the wagon-wheel effect occurs, so if we can see the same effect without the use of cameras or screens, perhaps it’s because we rely on similar mechanisms.

One paper in support of this view is Purves, Paydarfar, and Andrews (1996) study titled ‘The wagon wheel illusion in movies and reality.’ Looking at a spinning disc under constant light, each of the researchers and 11 of the 12 participants saw the wagon-wheel effect.

“The occurrence of this perception in the absence of intermittent illumination suggests that we normally see motion, as in movies, by processing a series of visual episodes.”

There were important differences between their perception and what happens in the movies, however. The effect was never stable and would only last a matter of seconds, it would also never come to a stop, even if the disc remained at a constant speed.

Another study in support of this hypothesis comes from an unusual place:  LSD users.

The 2011 study looked at the effect of visual trails, where people perceive a series of discrete stationary images trailing in the wake of otherwise normally moving objects, like one of Etienne-Jules Marey’s chronophotographs:

Because the effect is often encountered when someone has taken LSD (it’s also experienced with some prescription drugs or people with neurological disorders), the researchers speculatively write:

“Past snapshots are usually concealed from conscious perception—but some substances may interfere with their proper suppression, giving rise to the trailing phenomenon.”

The presence of wagon-wheel effects and visual trails suggest our visual system might be playing tricks on us. Maybe we see a bombardment of screenshots, but we’re never capable of noticing until something comes along that matches the speed of our system, or we break down the doors of perception with drugs and hallucinate our way closer to reality.

Of course, these results don’t conclusively prove that perception itself is built upon snapshots. But because animation and film offer a convenient metaphorical explanation for what’s happening, it’s a valid consideration. There is, however, an alternative.

In 2004, neuroscientist David Eagleman ran an ingenious study to figure out if the real-life wagon-wheel effect is a case of perceptive snapshots or something called perceptual rivalry.

First, they set up a disc which had a series of spots evenly spaced around the edge.  Participants would fix their gaze on a red dot just below the disc as it spun at varying speeds. When they noticed the effect occurring, they would press a key and hold it down for as long as it lasted.

While the effects weren’t stable, they did occur, confirming the presence of the wagon wheel effect.

In the next stage of the experiment, a mirror was placed behind the disc and to the side, so that the participants would see the disc spinning in one direction, and its reflection spinning in the other direction.

Because both the disc and its reflection spin at the same speed, if the snapshot theory is correct, the wagon-wheel effect should occur for both at the same time. This rarely happened, however. When one disc was perceived to change direction, the other generally did not.

They conclude that perceptual rivalry is a better explanation. Rather than our perceptual systems taking quick snapshots of reality, we have neurons that code for movement and direction, and at times like these, when the image is somewhat ambiguous, those two sets of neurons can compete.

“we … propose that the stimulated detectors for the reverse-direction are in a rivalrous relationship with the more highly stimulated forward-motion detectors.”

Our eyes don’t see the world as a camera does, and our brain doesn’t present reality like a film reel. These visual errors are the result of a system trying to make sense of uncertain data, something also very apparent in many illusions:

The Stream of Consciousness

For many, it might seem absurd to think that we slice up reality into tiny discrete chunks. Our subjective experience is, for the most part, smooth and continuous, flowing like a stream as William James once observed.

But then, every time you view something on a screen, every movie or animation you sit down to watch, don’t they also seem to flow naturally? The people we see on the TV look as if they move like the people we see in real life, and yet they don’t. If we did chop up reality, there’s no reason to expect that we’d know any better.

There are also interesting peripheral questions that could influence the discussion. For instance, at what point does the present moment become the past? And, for that matter, how long is a moment? How far apart do two events have to be before we consider them distinct moments in time?

Questions aside, as it stands now, the weight of evidence is in favour of the perceptual rivalry explanation. While we experience the odd illusion, an error in our interpretation, movement where there is none, the comparisons to animation and film don’t appear to hold water.