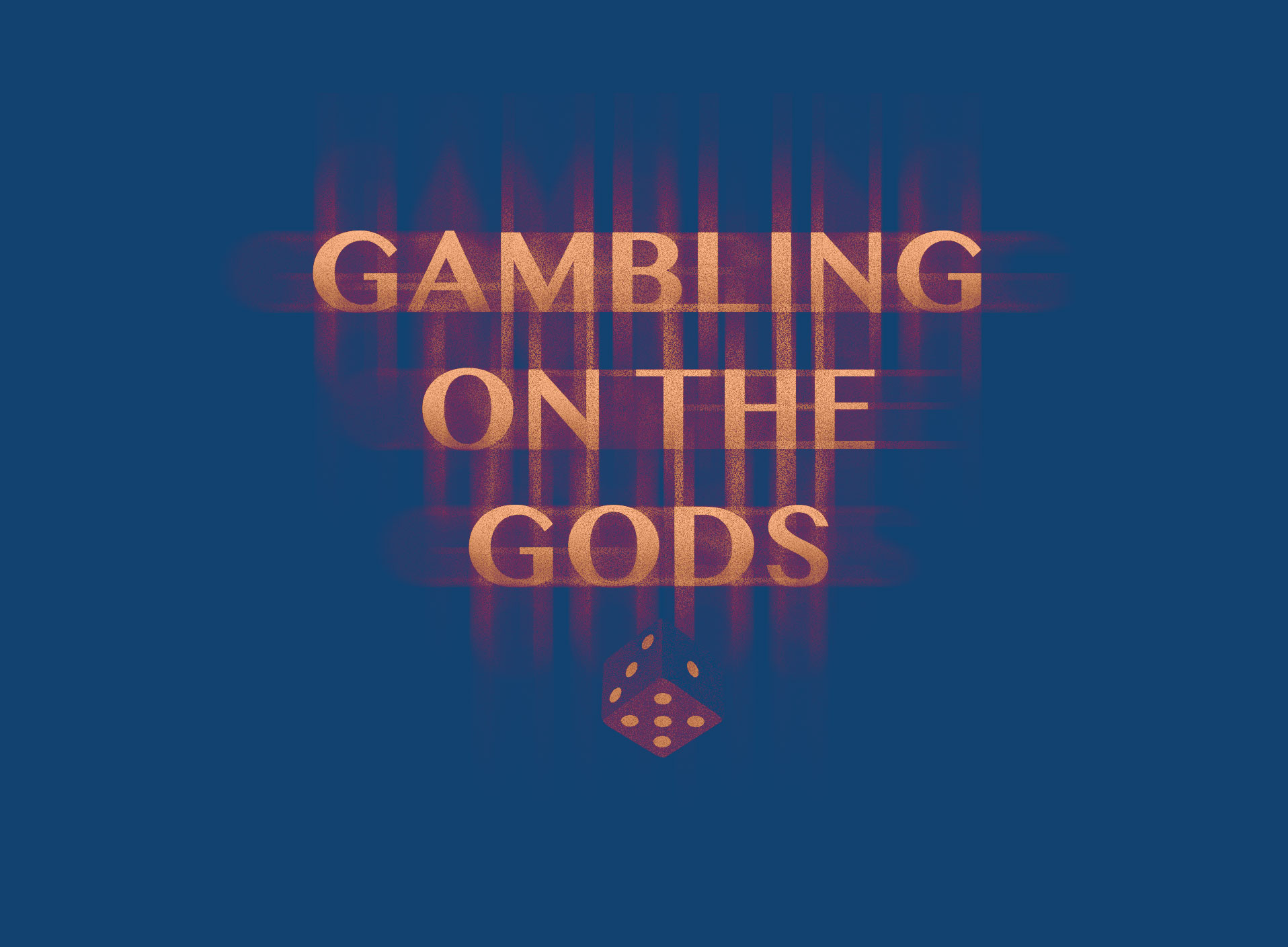 Gambling on the Gods

Born in France in 1623, Blaise Pascal’s intellectual prowess was evident early. He was writing about projective geometry and laying the groundwork for probability theory in his teens, and by his early twenties had built a calculating machine (the Pascaline) to help his father do his taxes.

When he hit his thirties, he had a religious experience that turned his attention towards theology and philosophy. He began writing an examination and defence of the Christian faith. However, he had struggled with his health for many years and passed away at 39, before finishing this project. After his death, other’s pieced it together and posthumously published it as Pensées, French for ‘Thoughts’.

While the book contained many such thoughts, one in particular stands out and has been called the first use of decision theory. Known as Pascal’s Wager, it makes a case for believing in God, using reason rather than faith.

Much like a coin-flip, he states that we each gamble on God’s existence or nonexistence, and we have no choice about it—we have to place a bet. However, while reason cannot tell us if God exists, it can tell us which of the options is the better bet.

From this perspective, any rational person should place their bet on God.

“There is an infinite chaos which separated us. A game is being played at the extremity of this infinite distance where heads or tails will turn up. What will you wager?” —Blaise Pascal

However, it didn’t take long for people to chime in with criticisms. One issue is that betting on God isn’t as simple as placing the bet and going back to life as usual—you have to drastically change your lifestyle, go to Church, abstain from sex before marriage, and so forth. The costs of this bet aren’t exactly negligible.

But the bigger question is, which God should you bet on? Pascal was writing in defence of the Christian religion, but the same process could be applied to almost any other religion with an afterlife and a major deity (particularly a judgey deity).

Given that many God’s expect complete devotion to them, it would be impossible to place the same bet with all of them. That leaves us in a bit of a bind. This is less like a coin flip and more like rolling a very-many-sided die.

And it doesn’t even stop at God. This type of wager has been (probably more appropriately) applied to climate change, while RationalWiki humorously states you might start ”Believing in and searching for kryptonite — on the off chance that Superman exists and wants to kill you.”

Is this getting ridiculous? Probably, but let’s explore one more possibility—a future God.

400 years after Blaise Pascal, more modern rationalists are still grappling with this argument—but rather than the existence of God, it’s the prospect of an all-powerful AI.

Roko’s Basilisk was published on the community blog LessWrong back in 2010. Roko was the user who posted it, while a basilisk is a mythical serpent king which was said to cause death with only its gaze—Pliny the Elder, writing around 79AD, said “all who behold its eyes, fall dead upon the spot.”

So be aware that by continuing to read, you’re putting yourself at risk.

The argument is roughly that an all-powerful AI in the future may look back upon humanity and punish those who didn’t play an active role in creating it, or at least those who doubted or impeded it.

“[T]here is the ominous possibility that if a positive singularity does occur, the resultant singleton may have precommitted to punish all potential donors who knew about existential risks but who didn’t give 100% of their disposable incomes to x-risk motivation.” —Roko

And now that you know about it, you’re in another version of Pascal’s Wager—either work to support this future God-like AI and gain its favour, or risk whatever torment something that powerful might impart on your measly human body.

The reaction to Roko’s Basilisk was swift. It was banned from LessWrong shortly after being posted for being an information hazard. But naturally this led to even greater attention. It was written about on many other sites and used in a song by Grimes which attracted the attention of Elon Musk.

“The most blatant obstacle to Roko’s Basilisk is, intuitively, that there’s no incentive for a future agent to follow through with the threat in the future, because by doing so it just expends resources at no gain to itself.” —Eliezer Yudkowski

I also have to wonder if there’s only going to be one super-powerful AI—what if you work towards a Silicon Valley version but China get there first?

Whether or not you consider this a real possibility, the prospect of God-like AI has swayed some into something of a religious fervour.

The Church of AI

In 2015, Anthony Levandowski filed paperwork with the state of California to establish a nonprofit religious outfit called Way of the Future. The goal was “the realization, acceptance, and worship of a Godhead based on Artificial Intelligence (AI),” in preparation for the singularity.

This AI-worshipping church was going to have its own gospel called “The Manual,” public ceremonies and eventually a physical place of worship.

I don’t know if this church sprang to life from Levandowski’s reading of Roko’s Basilisk, but he’s not exactly a layman when it comes to knowledge about AI—he worked on autonomous cars for Google, before starting his own company Otto and selling that to Uber in 2016 to the tune of $680 million.

But since the birth of his AI church and hefty pay-day, things have gone downhill. In 2017 Google sued Uber after discovering Levandowski stole internal documents on his way out, he was then fired. He talked to WIRED not long after, but focused mostly on his church, which he now had more time to work on.

“I’ve been thinking about the church for a long time but [my work on it] has been a function of how much time I’ve had. And I’ve had more since May.” —Anthony Levandowski

As of this writing it’s 2021, nearly 4 years after that interview—so what of the church? Not much, there didn’t appear to be any public ceremonies, no physical location, and I haven’t heard any gospel.

This might be because the time Levandowski thought he would have to focus on it didn’t materialise—in 2020 he was sentenced to 18 months in prison for trade theft. Fortunately for him, he was pardoned by Trump in one of his final acts in office, so maybe now he can finally start to build his church into something.

Nope, not happening. He closed it earlier this year, choosing instead to put the funds—all $175,000 of it—towards the Black Lives Matter movement, which he believed would have a more immediate impact.

From what I can tell, his church made it as far as having a website—a website that as of this writing is home to 3 blog posts from August 2020 on the topics of cameras, sewing machines, and fidget cubes.

This raises a couple of questions (other than the obvious what the f**k!?):

If an AI does, at some point in time, surpass the knowledge and intelligence of all of humanity, perhaps it will be worthy of God-like status. Many beyond Levandowski think this, but many also think it’s a bit crazy.

Count Elon Musk as one of the latter. He put Levandowski “on the list of people who should absolutely not be allowed to develop digital superintelligence.” He’s spoken out in the past about the existential risks of AI, and founded OpenAI to work towards building it safely.

But Elon also founded another company (there’s too many to count), Neuralink, which, if all goes to plan, will merge AI with the human brain. So maybe we’ll merge and become God-like ourselves. Well, some of us will.

All this fussing over Pascal’s wager and Roko’s Basilisk might be misdirected if the real God’s we should be betting on and worshipping are us—or, again, some of us. Maybe we should be making a church of Elon. Does that exist yet? It wouldn’t surprise me.

Which almighty superpower will you place your bet on?