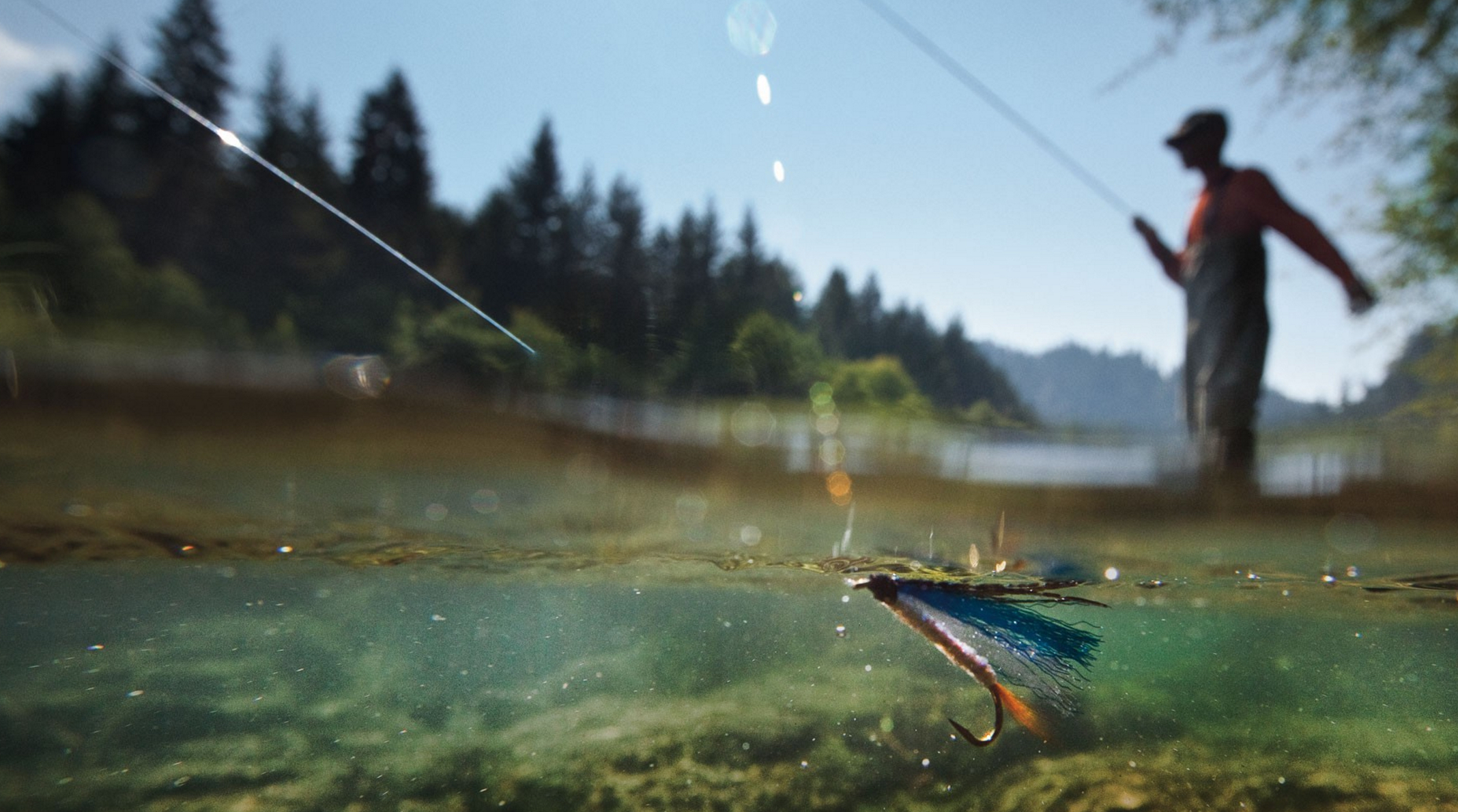 Fishing for a Creative Insight

There’s a lot of people that would love to be more creative, but while the benefits to a heightened creative capacity are clear, creativity itself comes in many shapes and sizes. This makes it rather difficult to pin down any one way to boost it.

We seem to label something as creative based purely on the fact of it not being readily apparent. New iPhone apps and silicon valley startups are considered creative, even if their achievements are the result of thousands of hours of hard work and detailed analysis. We also associate creativity to the flash of insight that seems to come from nowhere, from the ether of the unconscious mind.

When thinking of creative solutions, it’s the flash of insight that gets most of the attention. Not necessarily because it is most effective or more common, but rather because of how good it feels, especially when compared to it’s effortful counterpart.

It’s that a-ha moment, the realization of a pattern or connection that we may have felt infinitely far away from, that just “pops” up to the surface when we least expect it. From the outside it appears as if this insight took an instant to formulate, that there was no effort required from you. In an age in which time is scarce and productivity all the rage, quick intuitive solutions are valuable.

This is not all there is to it, of course. While the idea might have appeared in an instant, many things must have come before in order to allow for it.

Graham Wallas released The Art of Thought in 1926, a book that detailed 4 stages to creative insight: preparation, incubation, illumination, and verification.

This cycle of creative insight relies upon doing the hard work first, trying to find a solution through focus and effort, and upon failing—or simply taking a break—we then move onto some other occupation which ideally should take our mind away from the task.

At this point the problem we want to solve stews in the back of our mind. Research has now shown that mind wandering is an important component of this incubation stage, the random meanderings of our ‘monkey mind’ essentially seek out connections between what we were working on and other information within our memory banks.

It is hypothesized that mind wandering is an important stage in the formation and strengthening of memories—much like sleep is. The fact that it will occasionally strike upon meaningful connections and insights is possibly just a special byproduct.

In a way, the thoughts weaving in and out of your mind during daydreaming are random. We can end up in places for no apparent reason, and with little recollection of how we arrived. But they only appear random because we are so used to the focus and direction which defines awareness.

“Allowing the brain to rest opens the system to exploiting these mechanisms of nonlinearity and randomness, and amplifies the brain’s natural tendency to combine percepts and memories into new concepts.”

When we are ‘present’ we are usually aware and in control of our thoughts, but not so when we are mind wandering. We should not think of these thoughts as random, they are simply far more diverse and thinly related than we are used to. But they are related.

Just as dreams jump between strange visions and recollections, a wandering mind is seeking out the distant relationships and odd connections which help to form a more cohesive understanding of our experience.

Association is everything in the mind—it is what we use to remember something, to predict something, and to understand something. So, while insights might at first seem like random gifts, they are built through a system adept at finding elusive associations.

“Human beings have only a weak ability to process logic, but a very deep core capability of recognizing patterns.”

—Ray Kurzweil in How to Create a Mind

The third stage, illumination, occurs when that undirected form of thinking happens upon an association that applies beyond simple memory formation. It solves a problem, it illuminates a solution to a problem you didn’t know existed, it gives you an idea.

The final stage is verification, and this marks a return to conscious thought in which we test and validate the idea. Given our search for insights, this stage is not worth delving into here.

The thing is, not all insights obey this linear progression.

Incubation would seem like an important aspect to the creative insight, and it does certainly up your chances, but spending more time daydreaming is not always an effective strategy.

“Lots of people can recall insights that suddenly came to them while they were taking showers, but I doubt that organizations could increase the rate of insights in their workers by having them double the number of showers they take. The incubation stage doesn’t seem necessary and often would be impossible.”

—Gary Klein in Seeing What Others Don’t

While seemingly random thoughts that define mind wandering excel at pinpointing useful insights, this doesn’t guarantee them. We might go for hours ‘incubating’ only to come up empty handed.

Insights also don’t have to wait for you to relax and divert your attention. You might be in the middle of problem solving when a unique solution appears, your perspective suddenly changes and an answer is illuminated during the task.

In either case we put in work in some capacity before the insight. Whether we arrived at a creative solution during the task or after some time away, we have nonetheless worked before hand. So, is preparation in the form of directed effort the most important element?

The answer is yes for the most part. However, there are also times when we might recognize something in a way that surprises us, despite having little experience in that particular domain. For instance, Gary Klein tells a story of two cops waiting at a traffic light:

“As they waited for the light to change, the younger cop glanced at the fancy new BMW in front of them. The driver took a long drag on his cigarette, took it out of his mouth, and flicked the ashes onto the upholstery. ‘Did you see that? He just ashed his car,’ the younger cop exclaimed. He couldn’t believe it. ‘That’s a new car and he just ashed his cigarette in that car.’ That was his insight. Who would ash his cigarette in a brand new car? Not the owner of the car. Not a friend who borrowed the car. Possibly a guy who had just stolen the car.”

—Gary Klein in Seeing What Others Don’t

I doubt the young cop had been trained to notice the subtle differences in driving patterns between car owners and thieves. He likely had not spent time working on how to spot grand theft auto based on smoking habits. This did not stop him from recognizing the discrepancy, however, and he did so in front of a more experienced colleague.

Insights don’t always follow incubation, nor do they always solve problems that you’ve previously been working hard on. The cycle of preparation, incubation, illumination and validation is starting to look a tad thin. The first two stages are neither sufficient nor necessary—we might come to an insight after both, one or the other, or none at all.

Insights are difficult to catch. They are not likely to be confined to a system. Rather, they arrive at all sorts of times and for many reasons. We cannot plan for them, we must instead go about our day with an openness and receptive mindset, prepared to grasp them when they arrive, but not banking on that to occur.

While the cycle is not definitive, it is still useful. We cannot guarantee an insight, but we can improve our odds. That is what this cycle achieves. If we have a problem to solve, a healthy balance between focus and distracted will work best.

There is however another important aspect to insight: knowledge and experience in diverse domains. This is no surprise, but is not included in the stages above.

Preparation implies working on a specific problem, but a solution is often found in the most unlikely of places. And so we turn to incubation. But for incubation to stand more of a chance, it should have access to many domains and concepts, which means we should not only work on the problem at hand but be curious and open to other fields.

The more diverse our knowledge is, the greater potential for distant connections we have. An endlessly curious mind, one that learns new things whenever it has the chance, stands to benefit from that array of understanding with the recognition of connections spanning many fields.

“… we never really know if what we learn today will benefit us more tomorrow. While learning about the dinosaurs doesn’t immediately provide any extrinsic benefit, we never know what we might get out of that knowledge further down the road.”

We should include in our search for insights the act of learning about anything. If you work in architecture, don’t spend all your time there when you might benefit from learning about cosmology, chemistry, or economics.

While two topics may not share anything in the traditional sense, there are often concepts and ideas that can be cross-pollinated.

Work hard, relax, and learn something new. Preparation, incubation, education. While no guarantee, these are your best bets for landing that electrifying insight. We shouldn’t force it, we cannot expect it, we can only make the right choices while maintaining a receptiveness towards the uncommon and unusual ideas that may or may not arise.

Learn how to learn and up your chances for creative insights with Connecting the Dots.