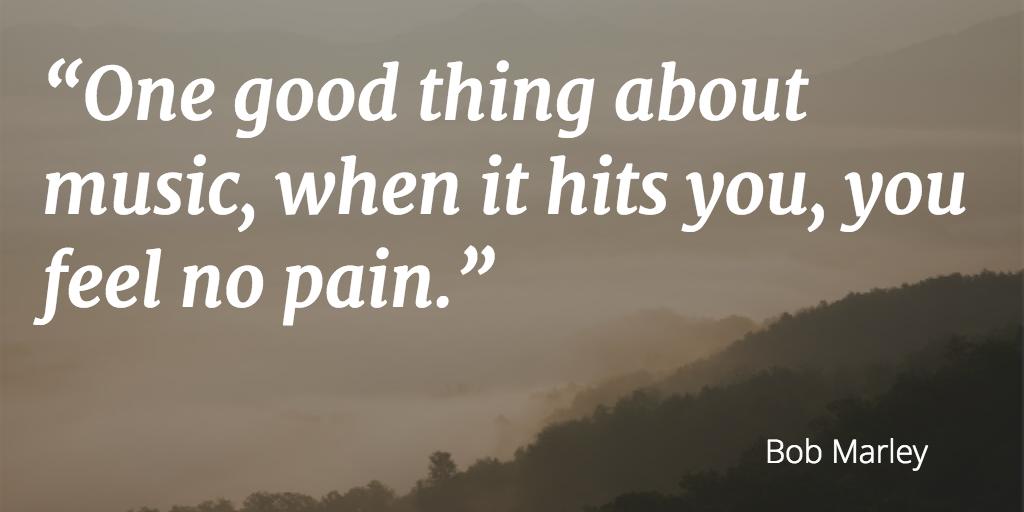 “We can change all of the pitches used in the song (transposition), the tempo, and the instrumentation, and the song is still recognized as the same song. We can change the intervals, the scales, even the tonality from major to minor or vice versa. We can change the arrangement — say from blue-grass to rock, or heavy metal to classical — and, as the Led Zeppelin lyric goes, the song remains the same.” — Daniel Levitin

I know what music I like. So do you.

I’m sure you have a couple of bands that you rely on more than any others, maybe those bands have changed as you’ve grown, there’s probably been a song that at some point you couldn’t stop playing, until it lost its effect anyway.

We keep going back to this music because it’s familiar, we know it so well and it speaks to us, it’s safe and would never hurt us, it’s ours.

Novelty on the other hand, is different, each time we approach something new we’re putting ourselves at risk, and we’re naturally a little fearful of it.

Robert Zajonc has observed that all animals initially elicit a fear and avoidance response in the face of novelty—Think of a dog seeing itself in the mirror for the first time.

It’s scary because we don’t understand it yet, we don’t know if it’s safe so we need to be cautious, it’s about survival.

Once we’ve been exposed to something a couple of times, that response changes, we know it’s safe because nothing bad happened the last time. We become familiar with it, and that makes us happy.

This is the mere-exposure effect—People develop preferences for things because they are familiar. I have a feeling we can apply this effect to music.

“Repeatability is how songs become the property of a group or a community instead of an individual, how they come to belong to a tradition rather than to a moment.” — On Repeat

Think about the issues facing music discovery in the age of Spotify and streaming services.

I used to hear new songs when I listened to the radio, I would buy the CD, and share it with friends, they would listen because they trusted me, I wasn’t going to hurt their musical senses by recommending something I wasn’t high on. But now, how often do you listen to something new? By choice? You have a huge collection of songs at your doorstep with these streaming services, and yet, in the face of all these options, we’re more likely to listen to what we already know, than risk getting burned by a track recommended by an algorithm we don’t yet trust.

“Our brains are updating their opinions all the time — particularly when it comes to perceiving visual and auditory stimuli — hundreds of time per second, and we don’t even know it.” — Daniel Levitin

The music model we currently use is one that supports the established, not only because they’re the ones on all the covers and billboards, but because people feel safe with them, you know what you’re getting.

Given this conundrum, how does a band without a large following get people to take a chance on their music? To be the artist that’s worth a shot, despite how little we like to put ourselves at risk? And how might a listener find good, new music without the threat of disappointment? Music that they’re confident and curious about, that can stop them from reverting back to what they know?

The Mere-Exposure Effect reaches it’s maximum point within 10–20 exposures, and after that can sometimes start to lose its effect. Zajonc also notes that the effect only works on items that don’t harm us, we are cautious about the item in the first place so as not to put ourselves at harm, so if we are disappointed or have a bad experience, then each subsequent exposure will cause us to dislike it further.

Robert Zajonc also argues that our decisions of ‘liking’ something are made with little or no cognitive processes, it’s all subconscious, and we simply seek to justify those judgments after we’ve made our decision.

“All of us are expert musical listeners, able to make quite subtle determinations of what we like and don’t like, even when we’re unable to articulate the reasons why.” — Daniel Levitin

So the first time we hear a new song, the decision of whether we like it or not is subconscious, we don’t rationally decide that ourselves, but we can likely try to justify those judgments afterwards. And if we like it, we might play it over and over, to a point (10–20 times) at which it loses its luster, and we need to leave it for a while. But, if we initially didn’t like the track or were disappointed by it, each following listen will likely make us dislike it more.

Now, I’m no expert, but for musicians trying to gain a new fan base, it makes sense to me to scrap the model of releasing full albums every year or two, in favor of a constant release. To start putting things out there as often as you can, so people have more ‘exposure’ to you. Share one track at a time if you have to, share images of the cover design, the team at work, random updates. But make sure they’re good, the point is not to rush things out unfinished, as you want people to have a positive experience, so as soon as you’ve got something worth sharing, share it.

As for the listeners looking for something new, what works for me is following the people I trust. I don’t often go with what a computer algorithm tells me, but I’ll listen to what my friends recommend. I’ll also listen to something that a band or musician I follow likes—I like Mogwai, and one day I had a look at the other bands on their label—Rock Action Records—I figured if I like Mogwai, I will probably enjoy the bands they felt were good enough to sign, and I came across Blanck Mass—that made me happy.

I think the problem with recommendations is that it’s based on the idea that this band ‘sounds similar’ to this other band, when it should be that this person you have similar tastes to enjoys this. It might be that streaming services are already doing this, but I still don’t trust random recommendations from a software program if I don’t know why or where it came from. If it were to say, “You might like Blanck Mass as they are signed to Rock Action Records,” then I would be more likely to try it, because I trust Mogwai, they’ve never hurt my senses. “People who listen to ‘this’ also listen to ‘this’” doesn’t work for me either—I don’t know these ‘people’ so why should I trust them?

I don’t have all the answers, and I can’t say there aren’t a million other problems that exist in terms of recommendations and discovery of new music. But it’s my opinion that, if you want people to start listening to new music, you need to provide it to them through a channel they trust and are familiar with. Don’t make the recommendations based on similarity, or what the millions of people that like Metallica also like; make it a physical thing, recommend Black Label Society because Zakk Wylde played with Ozzy, recommend the Melvins because they’re signed to Ipecac Recordings, which is run by Mike Patton. I trust those guys, I’ll take a chance on what they recommend.